Every Melancholy Needs a Sanguine

It's been a long time since I've posted anything that wasn't either a weekly thanksgiving list or a synopsis of what's currently going on in my life and walk with the Lord... The past couple months (which encompasses the entire time I've been blogging, now that I think of it) have been pretty challenging and, being a melancholy, I just tend to become very introspective and (overly) analytical during such times. Someday I promise I'll write some more lighthearted posts... Hopefully this one will be a step in that direction.

For some time now I've been thinking about writing a blog post about my friend Ashley, who has been there with me through some of my lowest times over the past couple of years. Ashley is a nut. And I say that with all the love in the world. She loves to have fun and be silly, and spending time with her is one of the best things I can do when I'm feeling overwhelmed or discouraged by things going on in my life. Ashley is a pro at distracting me and making me laugh in the midst of whatever I might be going through.

Early in summer 2010 after a super emotional day she spent the night with me where I was house-sitting at the time and somehow managed to distract me from my heartache with "arts and craps" (aka arts and crafts), Rockstar energy drinks, velcro ball, and a 2 am bedtime (which is unheard of for the two of us -- thank you, Rockstars). It was just the beginning of an entire summer filled with countless ridiculous laughs and memories. Ashley stayed with me many more nights while I was house-sitting. We listened to "Robots" by Flight of the Conchords a zillion times and SHE memorized the entire song. We drove around Lake Tahoe one afternoon just for the heck of it. We ate spaghetti noodles in her car while driving to our friend Luke's house to watch a movie and decided we would make them a staple snack for road trips (though we have never again eaten noodles in either of our cars).


We spent hours coloring at a youth group sleepover, as if we were with toddlers instead of junior high and high school girls. We saw Kris Allen in concert. We ate frozen yogurt. We walked all over the wrong hospital trying to visit one of our youth girls who'd had a baby. We went to see "Toy Story 3" with a bunch of girls from church. We volunteered at the Crisis Pregnancy Center with the youth.


We saw David Crowder in concert in Santa Rosa. We spent an afternoon in San Francisco's Chinatown, drinking Chinese sodas that exploded when we opened them, taking pictures flashing peace signs, and watching the older men and women playing card games in the park. We laughed uncontrollably for about 20 minutes straight later that night while looking at a picture we'd taken in front of a giant macaroni noodle at Pier 39 in which Ashley's foot was in an odd position and it looked like one of her legs was short and stubby.

We went camping in Santa Cruz with our youth group, which involved its own blog's worth of crazy memories. We floated down the Truckee River with Ben and Alex and Brett one Saturday morning, having 3 of our 5 floating devices deflate along the way, freezing most of the time because the weather turned unseasonably chilly, and huddling in Ashley's car for probably a half hour afterward trying to warm up. We went to see the Aces play baseball. And on and on it goes...


What started out as heart-wrenching ended up being one of the most fun summers I've ever had, thanks in no small part to my friendship with Ashley and all of our shenanigans. Our friendship hasn't been all fun and games; we've had our share of low times, too. But we always seem to get through the lows and find our way back to the fun-filled friendship we've shared for the past 6 years.

With this latest challenging season in my life, Ashley has once again been providing me with fun distractions and comic relief. Last weekend while we were hanging out I told her I'd decided every melancholy needed a sanguine friend, particularly during difficult times when we melancholies tend to get trapped in our thoughts. We need someone who can pull us out of our overwhelmed minds and make us laugh.


Now I need my fellow melancholies, too. (Perhaps I will blog about them soon as well.) They help me process what I'm going through at any given moment, and I am so grateful God has also given me melancholy friends who listen as I pour out my heart, sympathize with my emotions, and encourage me. I need my melancholies AND my sanguines. One group helps me to sort out my thoughts; the other prevents my brain from exploding along the way. Ashley has been a God-send as one of the latter. I'm so thankful for her friendship~for all of our crazy memories and all of the laughs we have shared. This blog only describes the tip of the iceberg, and I know there is much more to come! If you're a melancholy, I hope you are as blessed as I am with a sanguine friend like Ashley! 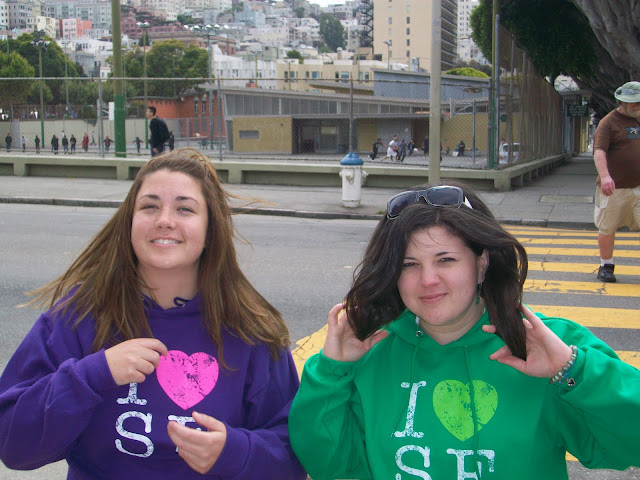 I love you, Kaysiga!!! You have been so much a blessing in my life. I have enjoyed our fun adventures (and what adventures they have been!!!) and I look forward to the ones to come. Thank you for putting up with me and all my craziness because I'm sure it can be so annoying at times. =D

Thanks for being the brain to my party. =]

Adventures, indeed!!! Thanks for being the party to my brain as well! ;o) I love you, too, Ashleyga!!!