I've found myself frustrated on multiple occasions lately with the way I observe people judging others from a distance.  This sort of uninformed judgment-making is commonplace in today's world -- perhaps especially so in America where we're conditioned to exalt the independence of the self, and even more so in the church where so many of us have been taught to fear those who might "lead us astray."  For the sake of self-preservation, in whatever form that might take, we close our eyes and ears and minds and, most grievously, our hearts, to anyone who thinks or sees the world differently than we do.

It is this sort of prideful arrogance that assumes we've better figured things out than another person -- and subsequently leads us to separate "us" from "them" -- that created the chaos in our church last year.  It's not that a conviction that one way is "right" or "better" is bad.  It is precisely this sort of conviction that guides us all in our daily lives, that informs the choices we make, whether that conviction stems from our belief in Jesus or Buddhism or scientific discovery or human progress or so on.  The problem arises when our conviction leads us to distance ourselves from those who live by a conviction not mirroring our own, when we lose our ability to interact with -- and, beyond that, to genuinely love and care for -- those who hold another perspective.

If we spent half as much time and energy concerned with whether people knew they were loved and cared for as we spend trying to protect our own reputations or guard our (or someone else's) morality, I'm convinced we would be more peaceful, joyful people... 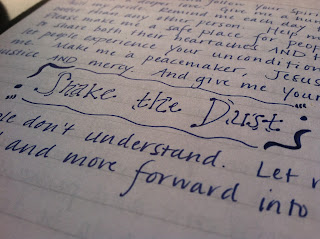 God, I don't want to keep revisiting these old frustrations.  I believe You've shown me a better way -- one of love, compassion, understanding, sympathy, peacemaking, and trust -- trust that "You've got this," that judgment can be left up to You and that I am free to love with abandon.  There are still many in my circles who don't (and perhaps won't) understand where I am in my relationship with You or with others.  They fear I've taken a wrong turn.  They've been taught to fear.  But I continue to rest in my confidence that perfect love drives out fear.  And I'm choosing love.  I'm choosing to believe You are the One who can redeem divorces and same-sex attraction and addiction and depression, and perhaps not always in the way we think it ought to be done, with reversal or elimination as our only options, but perhaps by bringing new life from the death of a relationship or by teaching us to extend grace and acceptance to those we don't understand or by our choosing to love well in spite of struggles that never really go away.

I want to run ahead full speed in my belief that LOVE -- and presence -- truly is the way to which You've called me, and us.  Help me to throw off what hinders -- these old concerns about being misunderstood that repeatedly wrap themselves like chains around me, causing me to dwell in old patterns of self-righteousness and fear.  Please help me to trust and follow Your Spirit into greater freedom and deeper love.  Give me a humble heart and kill my pride.  Remind me each day that I'm no better than any other person.  Help me to love well.  Please make me a safe place for people to be real -- to share both their heartaches AND their joys.  Please let people experience Your unconditional love through me.  Make me a peacemaker, Jesus, seeking both justice AND mercy.  And give me Your grace to shake the dust when people don't understand.  Let me really leave the past behind and move forward into LIFE.

Read the Introduction and Part 1.
Posted by Kaysi at 4:40 PM No comments:

"For am I now seeking the favor of men, or of God?  Or am I striving to please men?  If I were still trying to please men, I would not be a bond-servant of Christ."  Galatians 1:10

Judaizers had come into Galatia behind Paul and convinced the easily-swayed believers there that the Gospel required them to be circumcised according to OT law.  Paul re-asserted that if such were the case, Christ's death was useless.  He refused to succumb to the expectations of men -- even though those expectations were rooted in Jewish Scripture! -- because of Christ's sufficiency.

It's fascinating to note Paul had once railed against the very things he now preached (Galatians 1:23) -- and people glorified God because of it.

I ended up reading the entire book of Galatians, and it was as if for the first time.  Paul is so adamant about not allowing anyone to drag us back into thinking we must be enslaved to the law because that ideology is essentially blasphemous toward Christ's death and resurrection.  He never suggests we throw caution to the wind but encourages his readers instead to be guided by LOVE.  So good...

"Preach, saying, 'The kingdom of heaven is at hand.'  Heal the sick, raise the dead, cleanse the lepers, cast out demons; freely you received, freely give...whoever does not receive you, nor heed your words, as you go out of that house or that city, shake the dust off your feet."  Matthew 10:7-8, 14

JESUS' Kingdom is a stumbling block...

Read here the Introduction and Part 2.
Posted by Kaysi at 4:29 PM No comments:

I recently wrote about a season of grief that began a little more than a year ago.  (See A Year of Lament:  Introduction, Part 1, Part 2, and Part 3.)  In the introduction to that series of blog posts, I alluded to finding new hope and sensing that the darkness was subsiding, and my desire has been to write about that as well.

But even this new season is not without challenges.

Sometimes I feel like a baby bird trying to peck my way out of my shell, knowing even once I've emerged my wings are still going to have to be strengthened before I can actually fly.  And that probably means some falls and bumps and bruises along the way.  But the prospect of flying pushes me forward.

I read an excellent article today in which Brian Zahnd briefly describes how rediscovering Jesus in his 40's altered the way he was reading Scripture (and, subsequently, his thinking) even though he'd been a Christian since he was very young...


"...in my forties, I began to encounter Jesus all over again.  I discovered the 'unvarnished Jesus' and gained new eyes.  I was born again...again.  The Bible had not changed, but I had changed.  I was beginning to read the Bible in a new way.  Ironically, it was closer to the way I read the Bible when I was teenager.  I now knew again what I had once known long ago -- that dropping atomic bombs on cities is incompatible with loving your enemy!  I now knew that no matter how you spin it, the Jesus of the Gospels would never bless the bombings of Hiroshima and Nagasaki.  Never!"

I went through some similar shifts in my thinking about three years ago.  Just as Brian describes not a mere departure but rather a return to a previous way of thinking, I, too, was returning to some perspectives I'd first experienced in my early twenties.  Back then I was disillusioned with church.  I felt we too often were missing the point of our whole existence by neglecting Christ's heart for love, justice, and mercy while constantly working to manipulate people into little more than assent to our beliefs and assimilation into our particular branch of Christian culture.

This kind of shift in thinking is not always well-received.  I know more than a handful of people who have been met with criticism and judgment from those who think we've stumbled down a "slippery slope" as we've come to believe God actually cares about life in the here and now, not just what happens to us when we die.  It's sad and ridiculous, really, but a lot of people have been taught to think this way, to fear anyone who dares to veer the tiniest bit off whatever path their theologian of choice has described as "right."  But if I remember correctly, Jesus told us that He IS The Way.

HE is The Way.

I cannot count the times I have pondered over the past couple years how little we grasp how radical, crazy, and even heretical Jesus would have sounded to His own people, the Jews, God's own chosen Israel, when He walked the earth.  At times He directly contradicted their Scriptures.  Had Twitter been around back then, He almost certainly would have received a "Farewell" tweet from a well-respected rabbi (for church pastors did not yet exist) at some point.  We, myself included, need to spend more time camped out in the Gospels, reading about His life and ministry, realizing HE is a truer picture of God than ANYTHING else we've been given.  HIS example is the one we ought to follow first and foremost.

So while I still have a lifetime of transformation toward Christlikeness ahead of me, I've at least been pushed toward the decision in recent years to follow Him actively, even when people around me don't understand, or sometimes even disapprove of, certain choices because my expression of Christianity doesn't look like the version that has been handed down to them.  I grapple with this because I want people to like me and approve of me, but I'm finding that following Jesus just might mean risking my reputation as a "good little Christian girl" because He just might lead me to interact with and even love people who might be looked upon with disdain in some Christian circles.

The following posts are excerpts from my journal in which I've wrestled with this.  Read here Part 1 and Part 2.
Posted by Kaysi at 4:22 PM No comments: