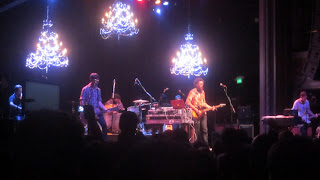 When we saw David Crowder* Band last month they played a new song containing a few lines that REALLY hit home with me...

Have you ever sensed God asking you to sacrifice something that meant the world to you, something that you believed He had actually given you as a gift, similar to how He asked Abraham to sacrifice his promised son Isaac? I sure have. And I've pondered how Abraham must have felt his heart was being ripped out of his chest as he hiked up Mount Moriah with his precious son. I know how excruciating it's been for me to think of losing something I consider dear, but I can't imagine being asked to sacrifice my SON. The thought is almost too much to bear.

Of course, being on this side of the story, we know that God mercifully provided a ram so that Abraham was not required to carry out His request after all, and naturally, that is what I always hope for when God asks me to sacrifice something. That's why these lyrics resonated with me... They openly, honestly, ask God to "show up" and spare us the agony of going through with the sacrifice He's asked of us... But they also acknowledge that our greatest need is to recognize our need for HIM. I have been recognizing this need in my own life in recent days. It's never an easy lesson and it is one I seem to have to re-learn periodically. But again and again I discover that God is enough, whether He "provides a ram" or not.


All that to say, this song "Let Me Feel You Shine" really struck me when we heard the band perform it last month. And I was THRILLED to discover today that they had actually released it as a single -- just two days after we saw them in concert, as a matter of fact! Check out the video below and you can listen and read along...

I have to say, it is extremely bittersweet to think of the David Crowder* Band being on their final tour. The very first time I ever heard one of their songs was when Cassidy and I were visiting Reno for the summer in 2004. We were both working with our church's youth group that summer and one Thursday night as we were setting up, "O Praise Him" was playing over the loud speakers and I instantly loved the song. I found out who was singing it and ordered their album, "Illuminate," which quickly became -- and is still -- one of my favorite albums of all time. That song, "O Praise Him," rivals U2's "Where the Streets Have No Name" as my all-time favorite song. (Shawn McDonald's "Captivated" is a close third.) I couldn't even tell you how many times I have listened to it since that first time in the youth room, and I have never grown the least bit tired of it. STILL, every single time I hear it, my heart is filled with such joy I can hardly contain myself. I am not typically one to raise my hands in worship very often, but when this song plays, I cannot seem to keep them down. I came across this other video tonight and couldn't help but smile while watching it, because I feel it so closely depicts the sort of uncontainable joy that comes over me every time I hear this song. I hope you will check it out and enjoy it as well!

I am so thankful for the way God has used this band through their years together. They have certainly blessed my life and I know many others would say the same! Their music will be something God uses to draw me near to Him for years and years to come! O PRAISE HIM!
Posted by Kaysi at 11:57 PM

Good thoughts, Kaysi. I was struck by something though, while I was reading this. Nothing that you said, just something that hit home to me - while God spared Isaac for Abraham, He still sacrificed His own Son for us. Sometimes the impact and magnitude of that just hits and I can't even begin to wrap my mind around that. He allowed His only Son to die...for me.

So to bring that full circle, sometimes the sacrifice is allowed to be made (instead of sparing us the momentary agony), because the long-term outcome will be beyond our wildest dreams. Just a thought on this rainy Friday. :-) Have a great week-end!!

And sometimes, as was the case when God sacrificed His Son, the sacrifice is not permanent -- it is completely turned around after it is made and restored in a more glorious way than ever imagined -- not just in the fact that WE now have salvation but also in the fact that Christ did not REMAIN in the grave but DEFEATED death!! Good news indeed!!