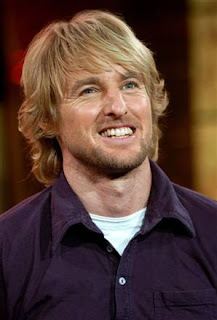 I don't typically make it a habit to wish celebrities a happy birthday, but for a certain few (namely, Owen Wilson, Bono, and Steve Carell, whose birthday I've actually celebrated with friends multiple times -- goofy, I know, but fun!) I'll make an exception and expose my inner geek.

I haven't always considered myself an Owen Wilson fan... I never DISliked him, he had just never really been on my radar. But it was SUCH a shock to me back in August of 2007 when I heard he'd tried to take his own life that I ended up pouring hours and hours into praying for him over the months that followed. I'm not exaggerating when I say this... In fact, now that I'm thinking about it I would LOVE to dig out my prayer journals from that time and reread the many heartfelt prayers I prayed for him. It was a special season of life for me.

I started watching as many of his movies as I could get my hands on and reading whatever information I could find about his life. And I quickly became a big fan. During that time, True Hollywood Story also aired an episode highlighting Wilson's life and showing various locations from his childhood which was spent in Dallas, Texas. When the opportunity presented itself the following summer to visit my friend Tira, who lives in Dallas, Tira graciously carted me around on a tour of sorts and we got to see the neighborhood he grew up in, a school he attended, and a theater he and his brothers used to sneak into.

Yes, I am a geek. But I can honestly say that it doesn't matter who the person is, if you start praying for someone, God will give you a heart for him or her. I'm so thankful God called me to pray for Owen Wilson in those days -- and I wholeheartedly believe it was a calling -- and he will ALWAYS have a special place in my heart because of it. I still pray for him occasionally and I trust that somehow God has been working in his heart in answer to these prayers.

If you've ever considered praying for a celebrity, or if it's a brand new idea to you and you'd like to look into it, I encourage you to check out the Hollywood Prayer Network. It's a great ministry in a field where the need is great. Who knows who God might call you to pray for! Someday YOU might be the one writing a birthday post for someone famous you've never even met!
Posted by Kaysi at 8:58 AM