The Stories That Stay With You 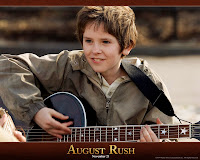 Remember this guy? Bless his heart, he was so confident his dream of finding his parents would become a reality, he would NOT give up hope no matter how many people he encountered (both ill- and well-meaning) who told him it probably wouldn't happen.

I've been thinking a lot lately about how stories like August Rush's, or like Rudy Ruettigers' in "Rudy," or like Billy Beane's in "Moneyball" (advantage of the latter two ~ they're based on true stories) have always resonated with me... I wasn't even thinking of Sam's speech in "The Two Towers" as I typed that last sentence but I practically quoted a line from it, which is just further evidence of the impact such stories have had on my life.


Those are the stories that stayed with you, that meant something, even if you were too young to understand why. But I think Mr. Frodo, I do understand, I know now. Folk in those stories had lots of chances of turning back, only they didn't, they kept on going...
-Samwise Gamgee

The older I get the more I believe God has put something inside me that relates to these stories because I'm going to need their inspiration as I live my own story. I believe He has designed me to be drawn to these tenacious characters because I myself am going to need to hang on even when things seems hopeless... Because some day it's going to be worth it.


Even when things look impossible, my tendency is to keep clinging to hope in spite of my feelings. I realize this can be a bad thing -- none of us are encouraged to beat the proverbial dead horse, after all -- BUT I also think our culture in general gives up on things FAR too easily, as brilliantly stated in this 2007 Hyundai ad.

I would rather be seen as foolishly optimistic and hold out hope for what seems impossible than succumb to culture's instant gratification mindset and discard what's not meeting my needs or being handed to me right this minute.


I've clung to hope in the past for situations that didn't pan out, and eventually having to let go has been painful, but I can honestly say that I do not regret that I held out hope instead of giving up. If nothing else, these times have trained me to be tenacious for when it IS the right time. I hope my HOPE always outweighs whatever doubts, fears, and discouragements I may face. I want to be counted among those who refused to give up even in the face of seeming impossibility. I want to keep believing that some day it's going to pay off.

Maybe even today.
Posted by Kaysi at 1:06 PM

Email ThisBlogThis!Share to TwitterShare to FacebookShare to Pinterest
Labels: Lord of the Rings, movies, quotes