"Celebration of Love" Day One - Welcome to the Party 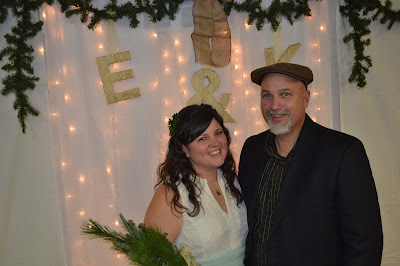 I was 34 years old when I finally married a very dear man last November.  Our story was not the sort of sweet, romantic fairy tale people love to watch & celebrate as it unfolds over time.  It was, rather, one born of heartache as I watched someone who was already a dear friend go through a extraordinarily painful year of loss in both his career & his marriage.

I had long dreamed of having love grow out of a friendship, but these were by no means the kind of circumstances under which I'd imagined that happening.  It wasn't cute; it was messy and inconvenient.  But it is our story.

To be sure, we had friends who celebrated the love that grew between us, but at the same time, divorce & remarriage can be sticky issues when you're coming from evangelical subculture.  We knew some folks would be hesitant (or would simply refuse) to rejoice in our relationship.  We knew that would be part of the cost.  But we both believe in a God who makes beautiful things out of dust, and we firmly believe ours, while not fitting the typical evangelical storyboard for marriage, is nonetheless a testimony of God's grace and a wonderful story of healing & redemption for two wounded people.

Before my friendship with Eric took that unexpected turn, I spent years & years aching to share my life with someone and wondering what was wrong with me that I continued to remain single.  Though I'm certain no one ever intended to make me feel excluded, it became increasingly difficult not to feel like an outsider as more friends & family members married their sweethearts with each passing year while I continued to go unpursued or, worse, rejected.  Churches seem forever to be bent on forming groups specifically for young married people, and each time something like that was suggested during my 10+ years working as a church staff member it felt like one more twist of the knife reminding me I was not like most of my peers.

I wasn't paying much attention when I first started to see this "Celebration of Love and Promotion of Marriage" challenge pop up in my Facebook news feed several weeks ago, but as the posts began to spread through various circles of friends I started to think someone might tag me.  However, there came a point at which my apparent failure to warrant a "nomination" took me back to that old feeling of being an outsider.  I might finally be at the party, but that didn't guarantee I'd be fully accepted, perhaps especially since my story was messy, not of the fairy tale variety.

I don't say this to shame anyone but to explain that the sting reminded me that I never wanted to forget what it was to feel like an outsider because I never wanted to slip unintentionally into behaviors that would cause others to feel that way.  So this morning when I finally DID get "nominated" to participate, I first felt grateful (thank you, thank you, Mandy!), and I then felt compelled to exercise some initiative and make my own tweaks to the challenge as I pass it on.

And you are hereby invited to join in this "Celebration of Love."

Love comes in many different forms.  It is not only evidenced in marriage.  While I am, in fact, beginning by posting a photo of my husband & me -- because indeed he is a wonderful gift in my life and absolutely worth celebrating -- I will also be posting pictures over the next six days of additional people whose love & friendship have made my life richer.  And I invite those I tag to do the same.  Spend seven days celebrating anyone who makes your life richer -- your friends, your kids, your siblings, your co-workers, and sure, your spouse!  Because they are ALL worth celebrating.

And YOU are worth celebrating.

Welcome to the party!

Today I'm tagging our friends Hank & Deetz.  Although I've only met Hank a couple of times, and I've never met Deetz in person, and Eric has never met either of them face-to-face, these crazy interwebz seem to have given us a couple of kindred spirits in them, and I'm often reminded of how thankful I am for their [virtual] presence in our lives!

(Also, for the record, if not one single person I tag over the next seven days decides to participate, I won't be the least bit offended!)
Posted by Kaysi at 7:45 PM

Email ThisBlogThis!Share to TwitterShare to FacebookShare to Pinterest
Labels: celebration of love