May we have hope in the days ahead. 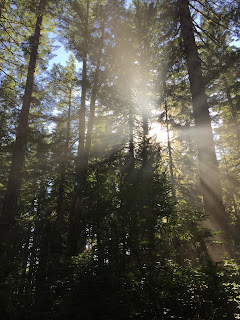 Having grown up in conservative evangelical culture, I became well acquainted long ago with the forecasts of doom & gloom & judgment that accompanied every.single.Democratic.presidency.  Such forecasts have been cluttering my Facebook news feed for weeks on end leading up to this year's election despite the fact it hadn't even been decided yet.  For much of my life I bought into this despair-oriented groupthink, but I began to realize a few years ago it was nonsense.

My husband & I both have had the label "Democrat" dismissively slapped on us in recent weeks despite the fact we consider ourselves nonpartisan and will examine every candidate before making a decision about who we're supporting.  I've come to understand that every candidate from every party is complex.  Each one represents some things I believe in as a follower of Jesus, and each one represents other things that make me cringe as a follower of Jesus.  And in this election, like it or not, Hillary Clinton made the Christ-follower in me cringe way less than Donald Trump did.

As my journey of faith has progressed in recent years, I've become increasingly aware that my understanding of what it means to be a Christian and to follow Jesus is fundamentally different from the understanding held by many modern American evangelicals.  I recently read a statement from someone claiming that individuals being held accountable for their own actions, "reaping individual rewards when they make good individual choices and paying the costs when they make bad individual choices" is the reason for "American greatness," and that "the Christian way" is "individualism, individual responsibility and individual accountability."

I'm not sure if I could possibly disagree more.

This notion first of all defies the reality, both presented in Scripture (hello there, Job) and evident in the world around us, that our circumstances are not an indicator of our righteousness or lack thereof.  On the contrary, as verbally illustrated by Jesus Himself, the rain falls & the sun rises on the righteous & unrighteous alike.  "American greatness" as described here is nothing more than a depiction of karmic belief.

This supposedly "Christian" way also completely ignores the central Christian concepts of grace & mercy -- receiving good things we don't deserve and being spared bad things we do deserve.  "American greatness" can build itself on individual responsibility if it wants to, but there's no way to mistake it for anything remotely like the Christian way, not when the latter is modeled after Someone who demonstrated selfless sacrifice on behalf of those who neither earned nor deserved anything whatsoever.

Nothing in this reflects the Jesus I read about in Scripture.  But sometimes we forget that Jesus is the clearest picture of God we've ever been given, and we opt for other versions of God that justify our attempts at self-preservation.  We let fear, rather than love, drive our thinking and our actions.

And then people think you're out of your mind for seeing any merit in Democratic social policies that call for those of us who have more to share what we have with those who have less.

No candidate is ever going to be a savior figure for America, despite the fact that each candidate will be championed as such by some of his or her supporters.  I never thought Hillary Clinton was the answer to all of America's problems, and I sure as heck don't believe Donald Trump is.  I do have fears about what the future could hold under his leadership.  But I also refuse to do what I've watched conservative evangelicals do for years...I won't offer my own forecast of gloom & doom & judgment for America just because a candidate I believe to be ill-equipped for the presidency is the candidate that won.

What I will do instead is give credit to many of my friends who have supported Clinton, some with hesitation but others with great enthusiasm, because your responses to what I know has been an incredibly disappointing night for you have been overwhelmingly gracious and even hopeful.  You have expressed sadness, shock, and fear, but you have not been hateful or judgmental.  You have continued to express love toward your fellow man.  And it has moved me.  I hope & pray you will continue to love others in the face of such hardships & disappointments, because I truly believe that kind of stubborn love, far more than any elected president, is what will shape the future for the world around us and continue to bend that long moral arc toward justice.

May you, and may we all, see beyond ourselves in order to love others, and may we continue to have hope in the days ahead.
Posted by Kaysi at 2:08 AM