An Ocean of Grace

Grace has been on my mind lately.

It all started (as did so many other things) with reading Blue Like Jazz. One of the parts that stood out to me the most about the book was a chapter in which Miller described the importance (and the difficulty) of learning to truly receive God's grace as a free gift. We are programmed in our culture to be independent, to make things happen for ourselves. But we can't earn God's grace. And trying to do so can potentially, as was the case with a friend whose story Miller shares, lead us to take devastating measures as we find ourselves coming up short again and again. (Even if you aren't interested in reading this book, I highly recommend checking out chapter seven if you get a chance.)

Not long after I'd read Blue Like Jazz, I watched a DVD called "Fruitcake and Ice Cream" in which Louie Giglio animatedly describes God's grace and how it's based on NOTHING that we have done and how, "when you get it, it gets you." I really wish I could convey the enthusiasm that spills forth from him as he talks about grace... Just thinking about it puts a smile on my face. It refreshed my heart to be reminded ~ again ~ of what an amazing and immeasurable gift God's grace is. Giglio goes on to tell the story of a girl named Ashley whose life was radically changed by the grace she was introduced to by a roommate whose life was overflowing with it. I found myself wanting to be like Ashley's roommate; to be like Ashley.

I think the reason these stories made such an impression on me is that they presented lives that had been radically changed NOT by human morality but by a deep understanding of God's grace, of His forgiveness and unconditional love. Recognizing His extraordinary love, and recognizing that we did NOTHING to earn it, inspired these people to dedicate their lives to God. They didn't have to be convinced that they were depraved. I mean really, don't we all KNOW this deep inside? I'm well aware many people act as though they think they are above that, but I truly believe that in our hearts, even if we won't freely admit it to others or ourselves, we know we're broken and needing help. It just struck me that it was a POSITIVE message that changed these people's lives. There was a FREEDOM to it that I hadn't really encountered in a long time, and it was reigniting a fire in my heart that hadn't burned so brightly in a very long time.

Grace has continued to permeate my thoughts in the weeks since I received these beautiful reminders... It has affected how I treat other people. Strangers I meet, I long to reflect the love of Christ to, even if it's only through a smile or a kind word. My friends and family, who I tend to take for granted and grow more easily frustrated with than those who aren't close to me, I have been moved to be patient with in instances where previously I would have confronted them because of my own personal unhappiness. The world around me, I see as broken and hurting, not menacing, and I want to engage it by sharing God's heart for restoration through my life. 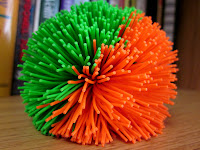 I recently promised to write a post about some mysterious way in which the Koosh ball had affected my worldview, and I hadn't intended to make that a part of this post, but it fits into where I'm going, so let me tell you about it. God recently inspired Cassidy with the idea that the tiny ends that surround a Koosh ball are like the behaviors we exhibit as Christians... Unfortunately, we tend to focus so much on those tiny ends that we forget (if we even knew in the first place) WHY they're there. A ridiculously high percentage of people who grow up in the church end up walking away from their faith after high school, and why wouldn't they if their entire Christian experience has been spent focusing on specific behaviors rather than developing the Biblical worldview that holds those ends together? (That worldview is what Cassidy compares to the center of the Koosh ball that connects all the outer ends.) I share this because my understanding of the Biblical worldview has been sharpened over these past few weeks as I've been reflecting so much on God's grace toward humanity. It's connected a lot of those "ends" for me.

Honestly, it's also expanded my desire to know what Scripture says. When I read a Scripture passage posted on Facebook recently that seemed to contradict God's grace, I looked up the surrounding text because I felt sure that the message those few verses sent on their own was taken out of context, and sure enough, the verses just prior to those pointed to grace and gave the verses that were posted an entirely different implication. Because of that I've grown discontent with reading a few verses and having no idea what the context is. I want to be sure I'm not missing the bigger picture. And I guess during this particular season of my life I'm specifically looking for glimpses of grace in each passage I read.

Case in point, this morning's devotional reading in Our Daily Bread directed readers to look up John 13:36-14:4, and I ended up reading all of chapters 13 and 14. While it wasn't the emphasis of the reading, I was particularly moved by the juxtaposition in chapter 13 of Jesus' knowledge of Judas' impending betrayal and His act of grace in washing the feet of His disciples. I don't know about you, but humbling myself to serve someone who's about to betray me would not be my natural response in that situation. If that's not a picture of grace, I don't know what is. And I want to be like that. The more I consider God's grace toward me, the more I want to extend grace to others. As I read about Jesus' act of grace this morning, I prayed for my heart to look more and more like His.

I am well aware that there are other aspects of God's character than grace. I know that He is also righteous, holy, and just, among other things. But I think perhaps we as Christians have been a little bit too quick to move past lengthy reflections on God's grace in recent years out of fear that the world around us might take advantage of it, running away with it and ignoring His righteousness, holiness, and justice. Miller says in Blue Like Jazz that he "used to get really ticked about preachers who talked too much about grace" and that he "believed if word got out about grace, the whole church was going to turn into a brothel." While his description is somewhat humorous, I can't lie, I've had the same sort of reservations. But Giglio addresses this very thing in "Fruitcake and Ice Cream," saying that people who take advantage of God's grace never got it in the first place. And you know, I think he's right.

Yesterday's Our Daily Bread devotional reading was a passage where Paul recalls confronting Peter for "compromising grace" in Galatians 2. As Marvin Williams stated it, Paul had


"confronted Peter face to face for cowering to a legalistic system that was powerless to change lives. He vigorously reminded Peter that grace leads to freedom from sin's slavery and to obedience to God."


I think of the stories Miller and Giglio each shared about lives that were truly transformed by grace and I believe this statement. I believe it with all my heart. I cannot fully express how grateful I am for how God has been reminding me of His grace over the past couple of months. I have fallen in love with Him and become captivated by the Gospel all over again. And my love for people is deepening as a result. When I start feeling frustrated or angry with someone, I turn my thoughts instead to God's grace and my irritation is soon replaced by a deep desire to give another chance, to forget about myself, to do what's best for the other person. I want them to know the grace that I know. 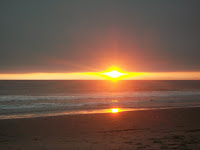 As I got ready for work yesterday, my ipod shuffled to the song "How He Loves" by David Crowder* Band. A few lines struck me in a new way as I sang along...


We are His portion and He is our prize
Drawn to redemption by the grace in His eyes
If His grace is an ocean we're all sinking...

Yes. It is His GRACE that draws us. It is His grace that has drawn ME. And I am being transformed by it.
Posted by Kaysi at 9:16 PM