One month ago today, after many years of hearing wonderful things about Blue Like Jazz, I finally borrowed the book and, as you may remember, ended up reading the entire thing in one sitting. This past week I was reflecting on the impact this has had on my life even just a few short weeks, and I wanted to chronicle some of the results, both direct and indirect, of that day.


1. I realized I was NOT, as I'd believed for the past several years, a "non-reader" after all, and I took up reading again. Since that day I have completed four books (Blue Like Jazz and A Million Miles in a Thousand Years, both by Donald Miller; Born Standing Up by Steve Martin; and I Am Not But I Know I Am by Louie Giglio) and I am currently over halfway through a fifth book (The Hunger Games by Suzanne Collins). As a side note, A Million Miles... and I Am Not... have both had as significant an impact on my thinking as Blue Like Jazz. I'd highly recommend any of these three books as great reading!

2. In order to take up reading again in a way that might actually be successful, I decided to set aside a few hours each week to go to a coffee shop specifically to read. As I purposed to do that, I also decided to pick one coffee shop and stick with it, in hopes that perhaps I'd develop a rapport with the employees and have an opportunity to reflect Christ to them.

3. Because of the intentional design behind my solo coffee dates, I began to look at my weekly coffee dates with Jessie with more purpose. We already have a good rapport with the guys working at the coffee shop we meet at weekly, so I began to look at that, too, as an opportunity to reflect Christ, and I also began praying for them. After I told Jessie about it, she and I also made this a part of our shared prayer time at the end of our coffee dates!

4. Specific portions of Blue Like Jazz that related to grace and what some might refer to as "friendship evangelism" influenced conversations I had with friends in the days immediately following my reading of it.

5. The whole reason I finally decided to read Blue Like Jazz was because a movie based on the book was releasing on April 13, and I wanted to read the book before I saw the movie. When the movie came out, I ended up going to Sacramento (the nearest city in which it was showing) TWICE in the same weekend to see it ~ once with Ashley, and once with Jessie. Both times, the movie spurred a lot of meaningful, thought-provoking conversation for the drive back to Reno.

6. The week after the movie released, I was at my coffee date with Jessie and I had a tote bag with me I was using to carry around a couple of books ("non-reader" no more, haha!) and other items when I realized I had unintentionally brought Blue Like Jazz along with me. I had grabbed it by accident that morning and was surprised to find it in my bag, but as Jessie and I were talking, something in our conversation sparked my memory of a part of the book and I pulled it out to read an excerpt to Jessie. I promise you, no more than 30 seconds had passed when another customer in the coffee shop walked by our table, saw the book in my hand, and stopped to ask if I'd read it. He had it on his shelf at home where it had sat unread for about four years. We talked about it for a few minutes, and he had heard about the movie so I got to tell him a little about that, too, and by the end of our conversation it seemed as though he'd decided to finally pull it off the shelf and read it! I'm telling you, the timing of this encounter was uncanny, especially given the fact that I hadn't even intended to bring the book with me that day!!! Super cool.

7. The encounter I just described was a springboard for gradually increasing confidence on my part in conversing with strangers... Two days later I finally had an opportunity to "break the ice" and find out a little about one of the girls who works in the coffee shop I've been going to to read. The day after that I had a friendly conversation with someone who was at the river when I went to enjoy the beautiful weather we were having last weekend. Today while I was reading at the coffee shop, a man who needed some help with directions for a motorcycle ride approached me and I was able to offer him some assistance, and later, as I was getting in my car to leave, one of the coffee shop employees (actually I think she may be one of the owners, but I'm not sure) was asking me about the guy with the motorcycle so I got to have a short conversation with her, too!

8. After enjoying my afternoon at the river last week and specifically having that encounter with the woman I met there, I was inspired to consider inviting some friends to join me weekly after church on Sundays this summer for a picnic lunch at a park... I have sort of the same idea for this as for my solo coffee dates, just to visit the same spot on a regular basis with the two-fold purpose of both doing something enjoyable and refreshing and making myself available for opportunities to reflect Christ to whomever I might come in contact with ~ and in this case, inviting others to join me!

9. I ended up reading a significant excerpt from Blue Like Jazz (the entire portion about the confessional booth, in case you've read it and are curious) to my fellowship group this past Tuesday night as we discussed evangelism and how to respond to people who have been legitimately "burned" by Christians in the past. I actually felt sort of bad afterward because I took up so much of our discussion time, but it was so closely related to what we were talking about I couldn't resist sharing it. And I think/hope it was beneficial!

10. As I saw that "Blue Like Jazz" was coming to the end of its unfortunately short run in theaters, I made a last-minute scramble to work out a plan for my friend Zack to see it before it was too late and ended up learning a valuable lesson in perseverance, specifically when it is aimed at someone else's benefit.


I could probably think of a few more direct and/or indirect results of that afternoon I spent reading Blue Like Jazz one month ago today, but I think this pretty well covers most of the highlights! It's hard for me to imagine a lot of these things happening if not for that springboard... It's been so exciting to me to see the ripples that have come from that day, and I'm excited to see what else is in store. I can honestly say I have been more excited about God, about the Gospel, about interacting with other people, and about life in general, this past month than I have been in I couldn't tell you how long, and although I credit God with all of it, I can easily point to my reading of Blue Like Jazz as the stone He dropped in the water that started this ripple effect. I thank Him for it with all my heart! 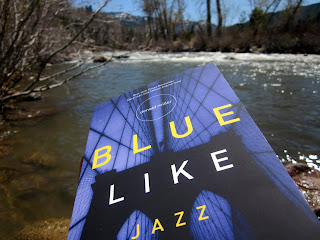 
Update 4/30/11 - My friend Carrie gave me a heads-up to another blog people are currently linking up to in order to share about books that have changed their lives. This was quite aptly timed for me since I just wrote such a post two days ago! Feel free to check it out if you are so inclined! And check out Carrie's blog while you're at it!

Kaysi - although I'm not a fan of Donald Miller, it sounds like you've picked up a lot of good stuff from "Blue Life Jazz". I encourage you to continue to make contact with "the outside", because that's why we're here - to be Christ to those who don't know. Keep it up! :-)

Thanks for the encouragement, Carrie! =) Thanks for sharing that link with me as well... We'll see if I can figure out how to do the whole link-up thing! =)

Wow! This is a really cool testimony. I like how you have a heart for reaching out and being a witness to others that you are seeing in everyday life.

I have watched some of Louie Giglio's dvd's, but I haven't read any of his books.

Kaysi, I am completely, totally jealous of your solo reading coffee date (seriously--why didn't I think of that?) and your regular coffee-with-friend date. I love to do both of those but they're not regular weekly events. Maybe I should make that happen!

I loved Blue Like Jazz when I read it years ago, and have been thinking of reading it again before I see the movie. (Although I just re-read, and loved, A Million Miles.) Your story of how the book is encouraging you to reach out to people is so inspiring.

Deborah, I LOVE Louie Giglio's DVDs as well! I recently watched "Fruitcake and Ice Cream" and it, too, has had a profound impact on my thinking! Thanks for your encouragement!

Anne, I can guarantee I would not have read four-and-a-half books this past month if not for that solo reading coffee date, haha! It's a great motivator for me ~ and is a very refreshing experience to partake in each week! I'm so glad to hear that you, too, enjoyed both Blue Like Jazz and A Million Miles! I know they're both books I will read time and time again! I hope you get a chance to see the BLJ movie (which is very different from the book, by the way, but communicates a great message that is right in line with the book) and enjoy it!

Thank you both so much for stopping by!! =)

Very cool story! I too only read BLJ recently, and really liked it. I got it from the library, but I'd like to have my own copy.

I'm so glad you, too, enjoyed the book!! You might find the book on sale somewhere since the movie was just out ~ our local Christian bookstore has it for $5 right now!!