The Beauty of "Neither"

And then this, while Joshua was there near Jericho:  He looked up and saw right in front of him a man standing, holding his drawn sword.  Joshua stepped up to him and said, " Whose side are you on -- ours or our enemies'?"


-from Joshua 5, The Message


A couple of years ago when I was taking the Perspectives course, one of the most profound things I came away with was a new understanding that even from the earliest days of human history, God's people were blessed to be a blessing.  God's blessing was not intended to stop with them; it was intended to spread through them to "all the families of the earth."  Israel was the catalyst through which God wanted to make Himself known to all nations. 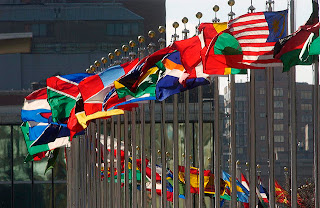 I honestly do not believe God was simply on some sort of power trip when He designed this; rather, He knew that only He could provide what mankind was created for:  our relationship with Him that was broken in the Fall.  So He chose a people who would live in such a way as to demonstrate this so that the rest of the world might be drawn to Him rather than their idols, which could do nothing for them.  Israel was never the point.  Even when God says He will curse those who dishonor His people, I'm inclined to believe the point is not mere favoritism but God's refusal to allow anything to prevent the flow of His blessing to the world through His people.

At the end of Joshua chapter four, shortly before the commander of God's army appears to him, Joshua reminds the Israelite people that when God stopped the flow of water in the Jordan River so they could cross over, just as He parted the Red Sea for them decades earlier, it was done "so that everybody on earth would recognize how strong God's rescuing hand is and so that you would hold God in solemn reverence always."  Then in chapter 5 when the commander of God's army shows up, Joshua asks him whose side he is on and he answers, "Neither."  Of course it makes sense that he's not on the side of Israel's enemy, but wouldn't we expect him to be aligned with God's own people?  This blew my mind.

Neither.  What this answer says to me is that God and His servants are on the side of humanity, not one particular group of people.  And that goes back to His design for His chosen people to be a blessing to the world.

Lest we, the Church, begin to think the story of God's work in the world is only about us, we need to remember that just as He designated Israel to be the conduit of His blessing to all nations, so He has called us to be the conduit of His blessing to the rest of the world in this day and age.  We are called to pursue peace and to love recklessly.  Should we choose to be on the side of believers or of nonbelievers?  Neither.

God is not about preserving us to prove a point.  He is about making Himself known through us so that others might come to know the Love they were created for.  May we keep this in mind as we interact with those outside the walls of our churches.  May we avoid the tendency to choose sides.  May we remember that we are blessed to be a blessing.
Posted by Kaysi at 10:56 AM